Art at the Edge of Collapse is the title of a forthcoming crime novel written by the collective pen of Cuartos Solos, a loosely-organized group of international art workers ranging from art handlers to scholars who self-identify as the precariat of semio-capitalism. The novel is an art-fiction that combines a hilarious plot with a satirical description of the art world, mixing statistical data about the art market and exhibition system with references to recent theoretical frameworks. Some critics have already shown their uneasiness with what seems to be a new hoax by the renown #Journal, and while some parts are certainly confusing and misleading, perhaps on purpose or a result of collective authorship via the exquisite corpse writing method, the main argument depicts a harsh near future.

Democracy has been replaced by a logic of global dominance, justified by daily terrorist attacks and continuous climate wars that propagate a state of emergency as the new status-quo. In this context an art curator is trying to revamp social practice through activating riots as performative devices. Through a series of coincidences, she collides with left-accelerationist hacktivists, post-colonialist radical queers, a Berardian faction of autonomists, and scattered cyber-feminist cells. Her project is selected by a prestigious art foundation from a Middle Eastern city-state that funds the project as part of the Chinese New Year celebration. While the curator recognizes the inner contradictions of the institution, she is invested in finding a glitch that will allow her to deliver the project while at the same time critiquing the hosting institution. The project contains a series of instances that although apparently unrelated, will connect the multiplicity of complex layers.

A total of thirty-six initiatives are described in the text—a number that seems to reflect the number of individuals and sub-groups involved in the writing of the novel. Among these are: a collectively written novel, a self-reflective meta-narrative that winks to the actual production of the very same novel; a mockumentary on a new materials lab that has discovered a liquid mirror screen; a comparative analysis of invasive species in the newly populated South Pole; a business plan for the commercialization of human saliva; and a manga comic comprised only of sexting messages. The curator ends with the enormous task of developing these projects, placing her in the position of having to search for more funding to produce all thirty-six projects. This opens a new narrative line, that describes the efforts and misadventures of the curator in the quest to find external funding. Especially poignant are an episode of sexual harassment by a board member of a world-wide museum and a three-day wild party in Tokyo with a German dealer, a goofy Brazilian artist, and an Australian supermodel. It is at the end of this section, when the more than six-hundred-page novel makes a turn, and becomes a blunt description of data that substantiates the internal inequalities and contradictions of contemporary art. The reader is swamped with facts, names, and details that span more than fifty pages. This is delivered in an exasperatingly boring academic tone.

At some point, the novel picks up again with a captivating chapter written in a visionary style that mixes manifesto-like premises with hallucinations as verbalized by a mysterious shamanistic character, a guru of the resistance, in a clear homage to The Oracle from Matrix. This chapter lays out a political program that denounces the global capital-fascist regime and opposes a model of sanctuary spaces interconnected by creative agents to advance the aesthetic and existential limits of what is possible. The androgynous character of the guru becomes the leading figure of this section that concludes with a list of cryptic prophecies on the fate of the (art) world. The novel continues with a hard theoretical in-depth analysis of transcendentalism and German idealism as cognitive processes to be developed as tools to overcome the miseries of the rulers and their despotic programs of micromanagement. Eventually, the novel returns to the crime genre and speeds up the events to catch up with the plot. After many vicissitudes, the curator has gathered the resources to produce the projects and activate them as a riot – whatever that means – during the Chinese New Year. What she does not expect is a last twist of events. The president of the art foundation, a royal prince with ties to clean energy technologies, and completely unknown to the reader until now, appears on the morning of the opening day to congratulate the curator and the team. At lunch with the artists, the curator realizes the absurdity of the whole project, all of what has been produced is likely a joke to the president, who underlines the silliness of many of the thirty-six projects. In a frustrated attempt to confront the president, one of the participating artists makes a toast, describing the precarious general conditions of art workers, the unpaid labor that goes unnoticed, the multiple efforts to reduce budget expenses, a discourse that vindicates the artistic field as a site of encounter, contestation, and resistance. The curator is aware that the raging tone is partly due to the frustrations of the artist in relation to his project, a VR piece in the middle of a 3D printed sculptural installation that was particularly pricey and had to be re-scaled more than a few times. Despite the confrontational tone of the discourse, the other attendees are delighted to be there, and even laugh at some of the frustrated artist’s remarks—honestly the discourse is a funny read. After lunch, the curator goes back to the office to make some calls and what we know next is that she is found dead, strangled with her head leaning on top of a MacBook Air. The novel flashes back to moments from her life, her French-Peruvian wealthy background, her affair with a renowned Mexican artist during the Venice Biennale, her time as a student and raver in Berlin, and so forth. Back at the art foundation a sexy detective is interviewing the staff, interns, janitors and artists, and after few weeks of an unsuccessful search, an intern (precariat slave-hero?) reveals a clue key to unlocking the resolution of the murder. At the funeral, the president of the art foundation praises the curator’s work and announces a new award to emerging practitioners to continue her research.

The novel concludes with a four-page rant titled, “On how everything sucks and you will never ever make a difference to change the conditions because you benefit from the same circumstances that you strive to criticize. Your work is not rigorous enough, in one word: irrelevant.” This serves as a summary of the entire novel, and leaves the reader stranded in a confusing situation. While a large part of the text is a compilation of quotes from unknown sources, fragmented sentences, and unfinished thoughts, this section builds a relation between the murder of the curator and the end of coherence. “In the time of absurd banalities, when Instagrammers are icons and tigers have become extinct, we strive to retain the last vestiges of contemporary life, a leaf in a pot, an Amazon Prime account, a colony of ants as pets in the twenty-fifth floor of a residential skyscraper. The end is near, and the meteorites will fall causing tropical depressions and craters of unreachable proportions, a human stands alone in the desert, and all that is solid evaporates into gas.” The apocalyptic end of the novel, with agonistic pseudo-poetic lingo, attempts to unsettle the reader and their rapport with the surrounding techno-sphere. The novel is as complex as polemic, attempting to shake the foundations of our current – not future – circumstances. 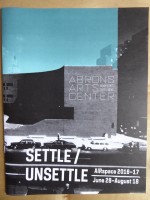