When Brancusi presented his sculpture of Princess Marie Bonaparte under the title Princess X at the Salon des Indépendants in 1920, many saw in the polished bronze an obscene and threatening phallus. The piece prompted a polemic, it was removed, defended in a manifesto published in Le Journal du Peuple signed by a large group of artists, and finally readmitted in the exhibition. When earlier versions of the piece with the title Portrait de Madame P.D.K. were exhibited in New York at De Zayas’ Modern Gallery and in 1917 at the Independents Exhibition, the sculpture did not elicit any special reaction—in fact it was Duchamp’s Fountain that stirred controversy. As with many of Brancusi’s pieces, it is the smooth surface of Princess X that is most alluring, seductive in its invitation to be touched, licked, caressed. These sexual references seem somehow suitable in the portrayal of a woman dedicated to psychoanalysis with a special interest in female orgasm. Mrs. Bonaparte demonstrated her allegiance to psychoanalysis by playing a crucial role in Sigmund Freud’s escape with his family from Austria months after the annexation by Nazi Germany.

In her landmark essay, “Sculpture in the Expanded Field,” Rosalind Krauss references Brancusi’s work in assessing the modernist status of sculpture: “Through its fetishization of the base, the sculpture reaches downward to absorb the pedestal into itself and away from actual place; and through the representation of its own materials or the process of its construction, the sculpture depicts its own autonomy.” Base and sculpture are integrated and removed from the attachments of site and locality as they are transported into the ascetic gallery interior. Krauss’ piece revises our understanding of the work of several artists arguing that it surpasses the historical status of sculpture to propose a split between practice and medium, opening the field for multiple forms of action and procedure.

From Krauss’ 1978 essay, we can distinguish a line of practice that is liberated from the constrictions of modernist medium-specificity where artists oscillate between mediums applying them according to the logics of each particular work. In addition, the emergence of the medium as disconnected from practice motivates an appreciation of materiality as active agent. Krauss’ essay takes then another perspective, one that accounts for a medium as an independent generator of content, akin to practices that focused on systems and ecologies.

The conditions of the material reveal the presence of the medium and the ways in which its disposition performs in parallel order with our human field of action. Whether through the celluloid of 16mm film or the chocolate bars of a sculpture, materiality emerges through a rhythmic and unstable composition of particles—an ongoing process that expands through time and territory, uniting in one concrete entity all the circumstances of its nature. The use of resources, the exploitation of biological and mineral otherness concentrate in a particular position, whose variability depends on the properties of its physical composition.

The choreographic character of matter, its multiple combinations and transformations constitute those assemblages that we recognize, as they follow a pattern, creating an expectation to be fulfilled. The anticipatory capacities of humans, our possibility for prediction based on past observations, experiences, and application of physics gives us the opportunity to adapt and foresee threatening or pleasurable situations. We want as much as we do not want. Societies live suspended in the constant tension generated by the disparities of necessities, wishes and limitations. Advanced societies are distinctive in their economically dependent emotional need to possess and accumulate resources that can provide the matter of desire. The liters of coffee and the piles of paper cups and plastic lids served in New York City in one day are the manifestation of larger chains of actions taking place in agriculture, trade, and industry. Identity performs its features through the organization, mix, and association of material-based products—organic and synthetic—whose value we recognize and crave. Matter makes medium makes individual. The object as final outcome of the material processes becomes a magnetic prop for our performance, stimulating gestures and poses that we would not be able to imagine without being prompted by the materialized product. Far reaching, we are entangled in these dynamics, supported by entities and devices, whose implications are deeply embedded in the exploitation of almost everything. The effectivity of these channels might be improved, but it is the junk culture, mass-production, and consumable routines that remain as triggers for the world’s enervation.

Growing patterns of economic zones, political obsolescence of western models of social division, delighted corporate powers—should this be the beginning of a manifesto on the relations between being and matter? If this platform were developed would we have the ability to better communicate the disparity and disjunction among us—those who act, those who react? Those of us who do not want to act, those who are not allowed to act? Sculpture might echo those circumstances in which we are embedded through shape, weight and smoothness creating a series where each individual piece is the reflection of multiple variants, confronting us with equals more often than with subordinates. Slickness for survival, adaptation to the roles jointly played by millions of chances that each of us, with our determinants, are capable of pursuing. Life as an ethereal achievement of unscripted results.

THE PERILS OF OBEDIENCE is a long-term project initiated by Itziar Barrio in 2010. It includes performance research on group dynamics and power structures, and a sculptural instigation of forms as derived from mass-produced objects. The trapezoidal shapes expand the conditions given by objects, especially iconic is the Jeff IKEA folding chair from which this series derives. In both endeavors, performance and sculpture question the usual parameters of human action, and circles decision-making as constraint by determinants that go beyond individuals. Those conditions have shifted, and although some might be still connected to human authority and affects, many are now determined by the large cycles of production of the global economy. The project deals with the subtleties of these processes, and while the project itself is a process, the sculptural pieces encapsulate a presence, in which the material replicates the relational parameters of humans. 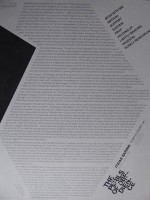 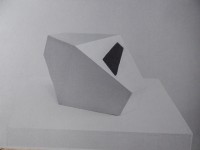