My focus on riots started from a sort of frustration and anger towards the art world. For a time, I was invested in thinking on the exhibition as a performative space that could generate a difference, a place where to encounter other bodies and objects, and that directed us towards a potential change on the ways we inhabit, relate, and feel within this planet. This happily positive, and very naïve approach was based on a study of minimalism dance and sculpture and the history of exhibitions and museums and a lose reading of theories of becoming and actor-network theory with the intention to develop a curatorial work that will treat the exhibition as spaces to generate points of contact, situations of intensities and centers of experience.

After few episodes, I remembered that “non art is more art than art art” a sentence by Allan Kaprow that had haunted me and I decided to look for those situations outside the art world that were able to reposition, and provoke a cut in the material-vital continuum in which we live. Moments of disruption that could generate something else, that could shake the ways we are, and the systems in which we navigate, if lucky as agents, and most of the times as accumulations of meat and feelings propelled to uncertainty. Entropy is a theme that Unbag has been working on in the past months and that I suspect as being very present in riots but still have to demonstrate exactly how.

So, I came to think about riots, as one of these moments of total disruption. Another sentence that was at the back of my mind was “Catastrophe is the most profound of the revolutions” and “revolutions have the atmosphere of parties” so with riots, terrorist attacks and rave parties came to situate an horizon of work, that I’m still developing. The aim is to treat them as case studies that will allow us to propose forms of practices that articulate the artistic as a dimension to act within the political and ecological crisis. This effort has to consider how contemporary art has become the official language of neoliberal globalization aiding to gentrification. As explained by Tirdad Zolghadr in his book Tractions contemporary art has become a regime that “is politically bankrupt, intellectually stagnant, and aesthetically predictable.” This reflects a certain exhaustion of the art world as a mechanism that neutralizes artistic and political discourses, such as social practice and occupy wall street, while reinforces structures of inequality and power, visible in museum boards, biennials, and fairs.

So, in order to draw a map of the riot in recent times, we should consider how this has become an ubiquitous form of contestation in the last decade. The financial crisis of 2008 just came to confirm the precarization of life that was already present under the neoliberal globalization that shaped the world after the defeat of the Soviet Union. Mainly characterized by the de-regulation of the market, flexibility of the working conditions, displacement of industrial production, isolation of individuals “there’s no such thing as society”, privatization of services, health and education, and degradation of the environment. All these aspects were reinforced and expanded with the “re-foundation of capitalism” as new norms to jeopardize middle class. The Paris banlieue riots of 2005, the Tottenham riots of 2011 and the Baltimore riots of 2015, show how police brutality and structural racism are an intrinsic part of the neoliberal agenda, and they served as rehearsals for the militarization of public space.

The lack of perspectives, the continuous threat of impoverishment, the economic dispossession of large segments of the population that have become mere surplus, and the loneliness and anxiety promoted by social media (digital panopticon), are some of the circumstances that demonstrate a mutation in our forms of interaction, affectivity, spontaneity and memory. A process of transformation that equates an alteration of democracy, to that of the environment to that of the personal-sphere. The result is a sort of entanglement that shakes our emotional, cognitive and psychological dimensions and is in this mix where we have to situate the riot.

So, the riot is at the same time a disruption and a reflection of the disruption that we live in. Which it might sound contradictory, and that is precisely the fascination that it has, as it appears as an option as it appropriates the destructive and exploitative environment in which we live. Recently, the Gilets Jaunes movement in France has given us the latest example of how a massive protest is able to mobilize thousands of people every week, to express their uneasiness and to use riot as a tool for protest. Although it is still unclear how this would evolve, and if it will turn into a political organization able to achieve any objective.

To return to the riot and its possible influence in contemporary art. We should consider the elements that compose the riot, such as the breaking of windows, the barricade, arson, clothing and props, looting, destruction, and the event-fullness as tranformative forces that use the public space as a performative device, one that questions and defines our positions, connecting the happening with the becoming. While art has taken these elements in many and often literal ways (and here are some examples), its distribution within the contemporary art circuit makes them sterile to have an impact on the social-political collective, placing them under the label of “political art”. To me it seems that we should consider the riot as a force that shapes the ways we work (in terms of being radically clear about our ethics) and the outcomes of this work (which could direct us to consider how we are enmeshed in the material flow, and how we can play to subvert this, for instance to consider the exhibition as a space of destruction. In any case, the riot opens a line of inquiry to what is already more than art.

On November 11th, 2018 sixty heads of state and government and representatives of world organizations met in Paris to commemorate the hundredth anniversary of the 1918 Armistice. It was a rainy Sunday, and the the majority of world leaders led by Emmanuel Macron and Angela Merkel approach the base of the Arc de Triomphe and seated under a structure built by the occasion. After few minutes waiting in silence the the appearance of Donald Trump seemed to mark the start of the ceremony. However, as they situate themselves within the audience they pause and wait for a next guest. Soon, Vladimir Putin made his entrance. What could seem just an anecdote of the protocol, it become a performance of the geopolitical tension of the world, demonstrating the distance between traditional allies, and the newly found influence of the Russian leader. The official remembrance to the more than thirty-seven million people who died during World War 1, turn out to be also the funeral to the international order established after the great wars of the 20th Century.

Once again, no representative of the United Kingdom was present in Paris, as they were all busy doing their own ceremony back in their insular London.

The ceremony developed with Macron saluting the troops as a young king and delivering a discourse about the risks of nationalism.

The culmination moment came when the orchestra played the seventeen-minute-long Boléro by Maurice Ravel. The piece was chosen because Ravel had shown a great courage in enlisting the French army when he was already a recognized forty years old composer. Boléro was first presented at the Paris Opéra in 1928 as part of a ballet by Bronislava Nijinska who performed an “hypnotical dance” set in a tavern in Spain. It is known that Ravel had suggested to perform the piece on the open-air in front of a factory to remark the mechanical composition of the piece. It has also been suggested that the insistent repetition of this work revealed the progressive aphasia that Ravel suffered.

Less than a week later, on November 17 the stage of the Armistice ceremony had been taken by thousands of demonstrators wearing a yellow vest. Although the Arc de Triomphe is a recognized monument key in the symbology of the Republic, the ceremony seemed to have re-introduce it in the imaginary of the collective and place it as a monument to both a lost world and the coming new world. The character of the arch as a transitional element of in-between-ness, was now recognized as a gate to an uncertain future, a ritual of passage that had brought together the power elite of the world with the disempowered masses of the precariat. And now, these were appropriating it as an object of commonality. 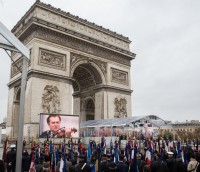 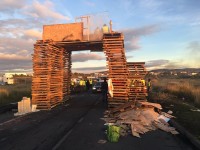